Since the age of eight, I have been a member of St John's Ambulance. I joined because one of my Primary School teachers did a talk about First Aid and St John Ambulance and I really enjoyed it and asked her if I could join.

When I turned 10, I became a John Ambulance Cadet. As a Cadet, I could further develop my First Aid Skills and provide Medical Cover at Public Events. I attended my first Public Event at the age of 11 and was excited to be doing my first bit of community work.

I have continued to go out on duty, and I have currently done over 800 hours of public service providing First Aid to the community of Jersey. While studying for my GCSEs, I trained my whole PE cohort in First Aid as part of their course.

I was also fortunate enough to be named the St John Ambulance Jersey 2017 Cadet of the Year, in this role I acted as an ambassador for St John and I wanted to make an impact. So, what I did was a national First Aid Day – where I went into schools and taught younger children how to phone an ambulance and older children how to do CPR as well as teaching children vital-life skills the event also raised over £4,000 for St John Ambulance Jersey.

I did all of this while studying for my college exams and two of my teachers noticed the work I was doing and nominated me for A Princess Diana Memorial Award. The nomination was successful, and I flew out to London in October 2017 and collected the award my teachers joined me as well as my parents. As part of my role as Cadet of the Year, I also attended private functions and events across the UK. I was also fortunate enough to be invited to an evening with Princess Anne.

When I received my Diana Award, I also wanted to visit Downing Street, so I asked, and after some persuasion, I was allowed to visit with my parents. I knew I wanted to work with the Diana Award Charity in the future, so I stayed in contact with them.

At the beginning of last year, I was invited to WE Day, London by The Diana Award and it has been the start of a great relationship. They asked me if I would like to host 2018, Princess Diana Awards in London, as I am interested in Public Speaking, I said YES straight away. I didn’t have anything to wear, so I looked at people who had styled Princess Diana, and I found out Gucci had styled her on numerous occasions, so I contacted their CEO as he agreed to style me for the ceremony.

The Diana Award also invited me to a meeting with The Head of HSBC and I spoke to them about the power of volunteering, I have continued to work with them, and I am currently working on an event with them.

I have been passionate about volunteering and making a difference so I have gone into schools and trained students in First Aid so that they can be the difference between a life lost and a life saved. The Prime Minister, Theresa May found out about the work I was doing and awarded me with a Points of Light Award and wrote me a lovely letter.

I was also invited to host the 2018 Everyday Hero’s Welcome Reception for St John Ambulance.

I have been a volunteer for nine years and never wanted anything in return. However, I have been recognised by HRH The Duke of Gloucester, The Queen, The Prime Minister and Princess Diana ‘Legacy’. 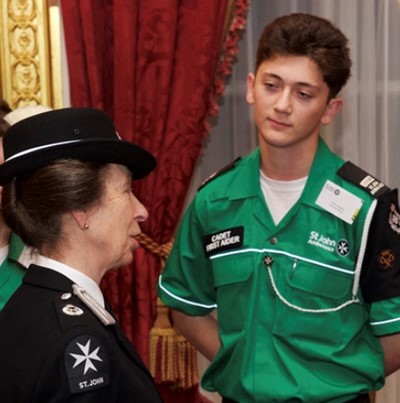